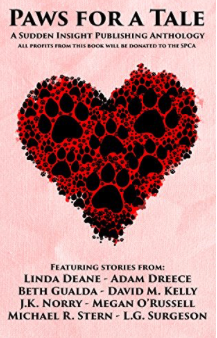 All profits from this book will be donated to the SPCA, in honor of all of the wonderful things they do for abused and abandoned animals.

Eight short stories from eight indie authors. While these stories tie-in to a series or book the authors have previously published, they all stand on their own.

Michael R. Stern tells us just what God created in “Selections from The Gospel According to Saint Skeeter”.

Megan O’Russell shares the origin of one of the most enigmatic characters from her The Tethering series in “The Forgotten Gray”.

Adam Dreece tells us more about Richelle Pieman in “Snappy & Dashing”, a companion tale to his The Yellow Hoods series.

L.G. Surgeson shows us the creation of a Black River Chronicle continent in “At the Birth of Light: A Creation Myth from Another World”

J.K. Norry brings us into the world of the First Walker in “The Walker’s Way”, a companion tale to his Walking Between Worlds trilogy.

Beth Gualda shares a sweet story about what an angel can do for you during a heat wave in “Summer Snow”, featuring characters from her Moonlit Wings series.

David M. Kelly shows us how a dog can keep you young in “How Much Is That Doggy?”, a selection from his Dead Reckonings and Other Stories collection.

Is it A Series?

Is it Easy To Read?

This is a book that’s been on my Kindle for a quite a while.  I’m a dog lover and all proceeds raised were being donated to the SPCA, so I’m pleased to have helped in some small way.

However, I expected to read dog tales and instead found myself thrown into fantasyland, many fantasy lands in fact. Worlds I had never dreamed of and people who perhaps only existed in my dreams. I’ve flown, I’ve faced devils, I’ve been hungry and I’ve done battle thinking I would die.

These talented authors all brought my dreams alive in glorious technicolor with their descriptive and wonderful tales.

What I found clever about this book is that it was aimed at two different types of readers: ones who love fantasy series, and those looking for something to thrill them. I don’t fall into either category, but what I did delight in is reading something different to my usual books.

Michael R Stern set us off with a Selection of Gospels According to Saint Skeeter with a humorous look at the beginning of creation. I was smiling throughout and at the end chuckling with amusement.

Megan O’Russell followed with The Forgotten Grey, a prequel to her book world of The Tethering Series. This was an exciting story with the promise of black magic and adventure and exactly what I meant if you are a reader falling into that second category.

Snappy and Dashing is a companion tale to Adam Dreece’s The Yellow Hoods. It’s a cross between fairy tales and modern technology. I was caught up in this one and Richelle, a tough fighter and leader had found herself trapped and caught. Very descriptively written and all I can say is, I was there.

I have heard of the fantasy series Black River Chronicles by L G Surgeson and it was a delight to be able to read At The Birth of Light: A Creation Myth from Another World. This story exploded from the pages with energy, colours and vivid description. It was the start of the world and it all happens before your very eyes.

The next story is another tie in, this time to the Walking Between Worlds Trilogy by J K Norry. This was quite an in-depth story that did lose me a little along the way. However, there is a tremendous battle scene with a Walker and the Devils, wonderfully written and presented to the reader that left me in awe. I was there, fighting that battle with him and the imagery is produced. Wow. Pretty awesome and gruesome, but simply glues your eyes to the page.

Summer Snow by Beth Gualda is described as an uplifting supernatural love story. This is the one that I became the heroine and I flew, just like in my dreams. The story ties into the Moonlit Wings series. I really enjoyed it and the love between a mortal and an angel. Real life mixing with fantasy is a great combination.

Ice Angel by Linda Dearne is a historical fantasy and takes us back to the Ice Age where tribes of people are fighting to survive. The animals wander off, the cold means they have to move into caves, and hunger strikes. Help comes in an unusual way to a young boy. Imaginatively written in an era I’ve never visited in a book before. I found it enlightening and clever with some good characters.

The final story is called How Much is That Doggy by David M Kelly and comes from the anthology called Dead Reckoning and Other Stories. I have to say this one was my favourite. Set in modern day it tells the story of an old man and dog. It has a nice clever twist to it and the ending I thought was the cleverest because I suspected the old man would give back what he was given, but nowhere was this mentioned. So whether that was my imagination or where the writer had skilfully led me, I’m unsure.

As if that wasn’t enough, each story contained some information about the author, their book series and an animal they had rescued.

Although I did find it difficult to read at times, this was because Fantasy is something I really read and many of these also belonged to series. This meant that I didn’t understand some of the terminology or the reference. However, I did decide to continue to the end and there were lots of elements in this book that I did enjoy and I’m sure if you are a fantasy reader, you will really love.