The Reader’s Review Room is a library of great reads. You can choose from a long list of authors or by genre. They have their own team of reviewers, so you get honest reviews without giving too much of the plot away.  There is also an opportunity for you to become part of the team and receive free Kindle books. Follow the link above to find out more.

They have their own rating system – Book Worms – Gold, Green and Blue.  You can read more of what they mean here.

The Truth Will Out is my third novel and my first thriller.  I’m delighted to show you two GOLD reviews.

Kelly needs to escape from her abusive and controlling boyfriend, but she’s terrified to leave. She’s then given a chance to start a fresh, but is the cost for her freedom too high?

Sarah is happy in her life. She has a dream job and a perfect roommate. But when a brick is thrown through the window, followed by a letter containing razor blades, her life starts to spin out of

Sarah is happy in her life. She has a dream job and a perfect roommate. But when a brick is thrown through the window, followed by a letter containing razor blades, her life starts to spin out of control. Detective Ryan Andrews is on the case and the two quickly form a close bond.

Will Kelly pay that price for freedom? Can Sarah’s secret past be kept from Ryan?

In the end The Truth Will Out. 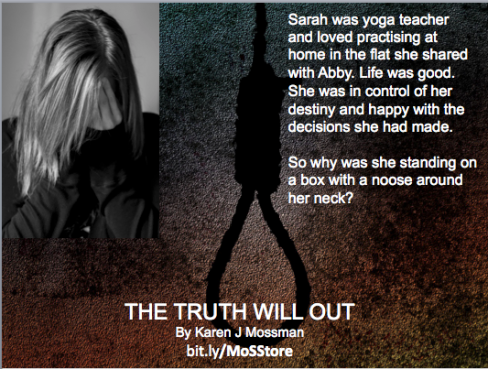 I’ve read short stories by Karen J. Mossman and was eager to read this book, The Truth Will Out. It’s a choice I’m glad I made. This story packs a punch from the beginning. Mossman wastes no time getting into the heart of the matter.

Sarah and her friend Abby are young women who share a house and are enjoying life. Playing a child’s game of jacks, one I remember well from my own childhood, they are startled when a brick flies through the window. It’s apparent this no accident as there is a word scrawled on the brick that seems to be directed at one of the women. Of course, they call the police, especially since Abby’s father is a Chief Superintendent in Manchester, England. This is just the first in a series of attacks. The question is, are both girls being targeted or is it only one who has attracted the attention of an enemy?

When Abby is injured her father becomes directly involved and assigns Inspector Ryan Andrews to investigate the case. Ryan is attractive, something Sarah immediately notices. The clever repartee between these two is spot on. Sarah has something dark in her past that she refuses to reveal. Ryan is determined to learn what her secret is. There is an electricity between the two that can’t be denied.

In chapter three the author introduces “Kelly”, and it is there that the mystery deepens. Mossman lays out the back story through Sarah’s memories. The story is filled with domestic violence and criminal behavior. The author does an excellent job of describing the inner conflicts an abused woman experiences.

Mossman used the colloquial language of the area but it is easy to follow and contributes to the realism of the characters. Although the growing relationship between Ryan and Sarah is expected, Mossman throws in some curves that left me surprised. I enjoyed this book very much.  The pacing is great; there are no dragging moments. The characters are believable. And the conclusion is satisfactory. I highly recommend this book for anyone who enjoys a thriller with mystery, some romance and doesn’t mind some gritty violence. I’ll definitely be reading more books by this author. I award this book a well-earned Gold Bookworm.

The Truth Will Out by Karen J. Mossman is a psychological thriller where the unraveling of a long buried past puts the central protagonist on a collision course with disaster.

Mossman gives us two characters- Sarah Whitaker and Kelly Burns- whose destinies are connected in a very interesting way. Readers should pay attention to both Sarah and Kelly because what Mossman does with their stories is quite ingenious. Unfortunately, impatience on the part of the reader might easily cause a failure to pick up on the various clues as they unfold.

When we see Sarah and her roommate Abby, we witness a close bond and genuine affection. Almost immediately Mossman places the women in jeopardy. But the question remains: Is Abby, the daughter of a police officer, the target or is someone after Sarah?

The chapters move back and forth between Sarah and Kelly. We learn that Kelly is the product of an unconventional and difficult childhood. Her mother was her anchor so following her mother’s death and later, a tragedy involving her father, Kelly becomes seduced by the financial rewards of a criminal enterprise. Kelly is a flawed character, yet readers will feel sympathy towards her because she regrets some of her actions. The trappings of financial security and power along with a misguided belief that an abusive relationship defines her makes it difficult for Kelly to abandon this lifestyle.

Sarah harbors her own secrets. As the plot thickens and the twists and turns unfold, Sarah’s past is soon revealed.

Despite the dark tone of this book that clearly lives up to its psychological thriller name, Mossman sprinkles romance into the story. Detective Ryan Andrews is investigating the attacks on Abby and Sarah. Sarah finds herself enamored with Ryan even as she remains guarded about her life. Her past is catching up with her and it seems that the clock is ticking down the hours until deadly consequences occur.

Mossman’s writing style speaks to both Sarah and Kelly’s desperation. As I was reading, I found myself more interested in the chapters that were focused on Kelly. It was Kelly’s story that drove the narrative and had a profound impact on Sarah. I don’t want to spoil the plot for the reader but I will say that despite the precarious moments, there is a nice payoff in the end.

For its clever and well-executed premise, interesting characters, fine writing, and twists and turns, I give The Truth Will Out a Gold Book Worm Rating.