Scars tell the stories of our lives. Have you ever looked at someone and wondered how they got theirs, but were afraid to ask?

I looked in the bathroom mirror this morning and saw a slight scar and my forehead. It’s hardly visible any more, but it was a reminder of my childhood disagreements.

It was 1963 and I was standing one side of my garden gate with my best friend on the other side. She was three years older at seven, and should have known better, I heard my dad say later. We were arguing and she threw a stone at me, and naturally I retaliated, but hers found its home on my forehead, breaking the skin. I screamed and she ran away.

My only other memory of the incident is sitting with my mum in the front seat of the car as dad drove us to the hospital. I can still see myself perched on the seat between mum’s legs, finger tips on the dashboard staring out of the front window and feeling excited that I was going to the hospital. Pity I can’t remember anymore, because I’m sure I wasn’t excited by the time I left. 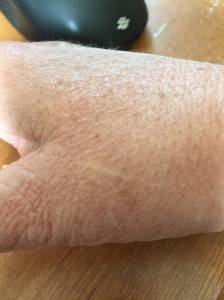 The next scar I have is on the base of my thumb. This was slightly earlier, I was possibly about 3, and only remember because we lived in a different house. Mum was at the shops and dad was on the toilet. I had decided to play with milk bottles and one of them smashed cutting me.

On the right side of my neck I have a large scar with several stitches which again has faded over the years. I was about four when I had a major operation. Born in 1958 there were no pregnancy scans. Nobody knew until the baby was born that it could be coming out feet first.

My poor mother was having her first child and in position, legs splayed to give birth, when someone shouted breach! She said the word echoed down the corridor as it passed from one person to another. Within a few minutes at least a dozen students all gathered round to watch.

No knew as I came into the world, that muscle ripped in my neck. It healed itself stiffly. 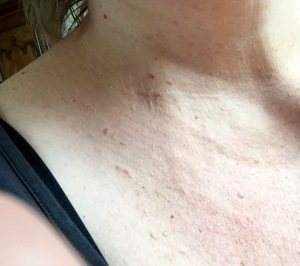 Within a few months, mum noticed my head one turned one way and I was admitted to The Orthopaedic Hospital in Oswestry, where we were living at the time.

I still have memories of a high sided metal cot and of my Grandma coming to visit bringing a stuffed penguin, which I loved, but left there and was never saw it again.

I still recall the ceiling passing by as I lay on the bed being transported to theatre. I have no recollection of being frightened at all by any of this.

Afterwards, I was encased in plaster from  the top of my legs, up my neck and round my head with my face showing and my arms free.

I can remember sitting at dining table trying to drink from a cup. As my head was set to lean to one side, the liquid went in my mouth and came out the other side. Luckily Mum gave me a straw after that.

When the plaster was removed, I had to relearn my walking skills as not having the weight of the plaster knocked me off-balance.

In my 50s I suffered from severe arthritis in both knees, so much so that I could barely walk. Two years apart I ended up with total knee replacements. It changed my life. The only thing to show are two long scars down each knee.

Over to you, do you have any scars with a story?