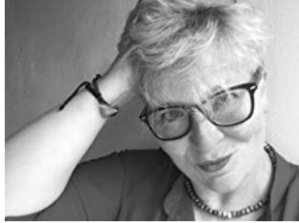 Today I present to you south Wales writer, Thérésa Hedges who living with her husband and furbaby by the sea.
She originally trained as a psychologist then (when the Ghostbusters thing didn’t work out) she went into teaching. All the while, she was writing, initially working on screenplays before moving on to be an award-winning playwright. She continues to work as a playwright/screenwriter, and recently completed work on the short “Like Glass”.
In 2015, Thérésa published her debut novel, the science-fiction thriller “Our Little Miracle”. 2016 saw the release of “Diary Of An Everyday Vampire”, and the story of a very different vampire – “Dominic”.
Her style is very visual, poetic, and has been described as ‘like Classic Gothic fiction of the best kind.’ She has a penchant for writing strong, independent female characters as can be seen in all her books, including the latest book “Trash”. Her next book, “First Impressions” (inspired by her all-time favourite Austen novel) continues very much in this vein.
Thérésa describes herself as being ‘multi-lingual, hyperactive and outdoorsy’. She is also an actress, singer, and is learning to play the guitar. She jokes that if/when anyone makes a film of Dominic, she’d like to play Aunt Melissa, please..!
We shall look at one of her books

Not all angels fall. Some are pushed… London, the 1890s. Dominic Ross is a sweet, idealistic student doctor, finding his way around London society with the help of his devoted friend James. Dominic’s life is full of potential: a promising career, good friends and a girl he adores. When he and James meet society darling Sir Adam Morell, they have little idea of the secret that will turn the innocent Dominic’s life upside down. “A Unique Twist on Vampires” “‘Dominic’ reads like classic Gothic fiction of the best kind.”

Other Books by Thérésa Hedges

OUR LITTLE MIRACLE
DIARY OF AN EVERYDAY VAMPIRE
DOMINIC: The Tale Of An Accidental Vampire
TRASH
FIRST IMPRESSIONS

Connect with the author on Social Media