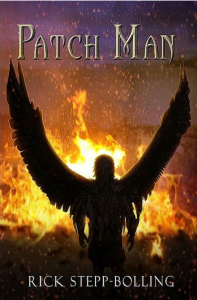 A prophecy declares a small child will decide the victory between two countries paralyzed by war…
An old man sells magical patches on the ruined streets of Hagra-Dis when a small, one-armed girl begs him to fix her doll. An Imperial missile blast kills the little girl, Meesha, but Var patches her back to life, and they flee marauding storm troopers. Imperial High Command unleashes Ulan, a formidable assassin and mystic who chases the Patch Man and his ragged band of followers through a labyrinth peopled with powerful beings and monsters. Both the pursued and pursuers find themselves in life or death situations when they encounter the Greeter, a mysterious being who controls the entrance to parallel worlds populating the labyrinth. It is in these domains they discover clues to end the war—with little Meesha as the secret key to ultimate victory and peace.

Where did the idea for the story come from?

Originally a short story, the idea of a country fighting for survival comes from recent events in history.

Please summarize your book in 10 words.

An old man selling magical patches struggles to save his world.

Give a quote from the books, one that says little but speaks volumes.

There was something unique about this young girl, and he was determined to stay alive long enough to discover just what that was.

Where are you based?

I now live in Ramona, California, in Northern San Diego.

Which social media platform would you like us to send your readers to for you?