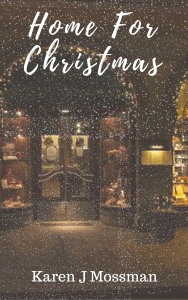 Christmas lights zigzagged across the road and shoppers hurried for the warmth of department stores. An icy wind brought a chill to the falling snow.

Louise looked into the store window. The tree lights twinkled giving off a warm aura. She turned away with a lump in her throat

Happy faced shoppers passed by, including a lady with two young boys, whose eyes shone with excitement. Louise thought of her brothers, and the lump grew bigger.

“Ho! Ho! Ho!” boomed a voice. The jolly Santa mechanically waved its hand from the doorway.

Last Christmas Louise had been helping Mum with Christmas dinner. Mum held the plate as Louise stuffed the turkey. Louise’s missing limb wasn’t an issue and at school, some thought it was.

Steven and Shawn, her little brothers had played with their car track, Dad, with his computer game and oldest brother Lee, strummed his guitar. It seemed a long way from the cold streets of London. The lump exploded and tears streamed down her face.

Stopping outside a telephone box Louise wondered what to say. Hi Mum, it’s your long-lost daughter, or Hi Mum, Merry Christmas. Can I come home?

She fingered the last coin in her pocket. She placed it in the slot and listened as it rang. Lee answered. The words stuck in her throat, “Mum,” she whispered and heard her name being spoken. Lee was one year younger at fifteen, no, sixteen now, he’d had his birthday, a days after hers. Her friend, and fellow runaway Simon had lit a candle and sung happy birthday to her. It was their only light. He had to blow it out to relight it.

A commotion of voices sounded loud in the background. It’s where Louise wanted to be and the was phone handed over again. “Lou?” It was Dad now. Louise trembled and it wasn’t just from the cold. “Where are you, Lou-Lou?” he asked softly.

Her old childhood name opened the floodgates. “I’m in London,” she sobbed.

Afterwards, Louise had one important job to do before she waited in the designated place for the people Dad had said would come for her. They lived a long way and it would take several hours to get there.

Louise had come to London full of dreams and adventure. At Euston station, a man befriended her offering her somewhere to stay. She soon realised what she had to do for her keep and ran away.

Then she met Simon in an arcade, he wasn’t much older than she. He’d been on the streets longer and knew the dangers. He showed her the best places to beg for money and how to steal food. He never once suggested she play the sympathy card as people did with their animals. They stuck together and Simon introduced her to the Help Shelter and their soup kitchen. When the snow fell they found an old house to squat.

“My dad remarried,” Simon confided one night as they huddled together for warmth. “We didn’t get on. She picked on everything I did. She forgot it was my house first. When Dad sided with her, I knew it was time to go.”

“Did you have brothers or sisters?” Louise asked, fascinated to be learning about him at last.

“Two, one of each. They barely remember Mum, not like me. She came in and stripped everything of Mum’s away. I minded, but no one cared what I thought.”

“I’m sorry. It must have been awful.”

Louise told him about her dad losing his job and how her parents had argued. She told him of the school bullies and being born without a limb, and the challenges that brought. Simon was sympathetic, but matter of fact. “We all have our crosses to bear. We do what we can and never look back.”

Early in December, as the days grew frosty, Simon suggested they move to the Help Shelter. Louise liked where they squatted, liked it being the two of them against the world. She enjoyed listening to his stories. They argued, as she did not want to lose the intimacy of their isolation. The following morning, Simon had gone.

As the Christmas season approached, Louise begged alone and the world felt bleak. Nobody cared for her. She was tired of fighting for survival and feeling unsafe. She told several people from the streets that if they saw Simon, to say she was sorry, and hoped he got the message. Huddled in a doorway, felt nothing but despair.

“Louise?” Raising her head, she saw a man and women. They held up cards with their photographs. “We’re from the Missing Person’s Bureau.”

Now in the early morning of Christmas Eve, Louise lay warm and safe in her own bed. She thought about her homecoming. How everybody had hugged her joyfully. Mum whispered she was sorry. “It was only because we love you.” She was referring to an argument Louise wasn’t supposed to hear. It made her feel they would be better off without her.

In evening, Louise sat on the settee looking at the tree lights, relieved that whatever differences her parents had were sorted out. Dad was back working and, more importantly, at 16 she could now officially leave school.

Lee was upstairs in the bath; Stephen and Shawn were watching Peter Pan on the television and Mum was embroidering.

Every so often Mum looked up and smiled. Dad read the paper, glancing over at her now and again as if he couldn’t believe she was really there. Louise was glad she’d made the decision to come home.

When the doorbell sounded, they looked up not expecting anyone. Mum passed Louise’s chair, kissed the top of her head and whispered, “This is going to be the best Christmas ever.”

3 thoughts on “Home For Christmas”