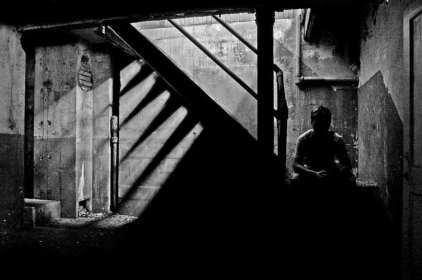 He slammed the door behind him and raced down the worn wooden stairs two at a time. He knew he was safe down here in the basement. This was his space, the only place that he was away from it all. His dad never came down here. He was too busy upstairs pimping out his mum. He was used to it by now, it didn’t affect him. Or he’d fought so hard to hide his emotions that it amounted to pretty much the same. His dad’s “friends” were always too drunk or high to even find the small door at the back of the kitchen.

This was his safe place.

The kitchen had been full of his dad’s layabouts again. The reek of whiskey and cooked heroin were as familiar to him now as the smell of cookies to any normal eleven-year-old. He’d had to run the gauntlet, of course. Sometimes jumping, sometimes tip-toeing, always carefully moving past the wretched men. A few had grabbed at his ankles today and one had been alert enough to clumsily expose himself but none had managed to pin him to the floor. Today had been a good day. Not like yesterday. Probably not like tomorrow.

It’d been another shit day at school. Mr Grimshaw had tried to have another “talk”. He just didn’t get it. He’d insisted on calling him a victim. He wasn’t a victim; he was stronger than that. He didn’t need their help.

It didn’t matter now though, not down here. He lay down on the battered sofa that dominated half the basement floor. A small laptop kicked into life and the familiar grunts and moans of his video collection washed over him. It echoed perfectly the sounds that he heard every day when he returned from school. That was his mum’s busiest time of the day when the workers at the local industrial estate needed a mid-afternoon break.

There had been some run-ins with his mum’s clients before. Most of them were aggressive and hated seeing him around. Some had been violent before to him and his mother. They couldn’t get him down here though. He knew what would happen if they ever caught him.

Something was wrong though. He could sense it in the air. He slowly muted the laptop and turned around. There were no working lights down here, only the filthy light that filtered in through the grid in the wall. The grid that needed cleaning. The basement was plunged into darkness as the laptop battery died. Then he heard it. The snigger followed by a wheezing cough. He felt the hot breath on his neck and the whiskey fumes mixed with cheap tobacco filled his nostrils.

This wasn’t fair, they weren’t supposed to be down here in his safe place.

Then the world went black.

You can find more about Matt on his website.

1 thought on “The Safe Place by Matt Beighton”